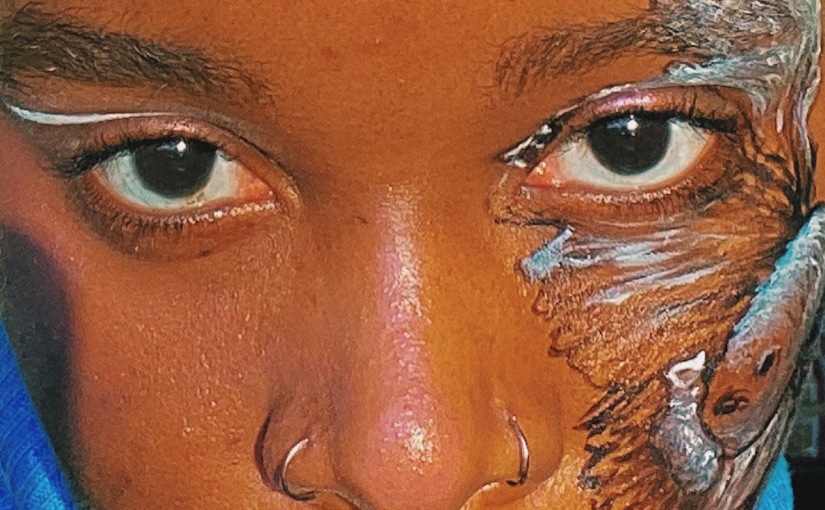 I was always late to class because I didn’t want to show my face outside or even leave my bed. My depression and self-loathing weighed me down and I constantly felt as if I was sinking. Painting my face is incredibly symbolic for me; this form of expression brings me light and hope. When thoughts fill my mind of how ugly I am or how I can’t seem to motivate myself to get out of bed, my makeup is the only thing that I can control. Putting on makeup in creative ways brings so much joy to days that can otherwise be dreary and depressing. I’m very bad at vocalizing this feeling and I always worry that friends and professors think I’m stupid or I’m taking the piss by putting so much time into my makeup. But I try not to care about these assumptions and rather focus on working to better this art form and brightening my hard days. 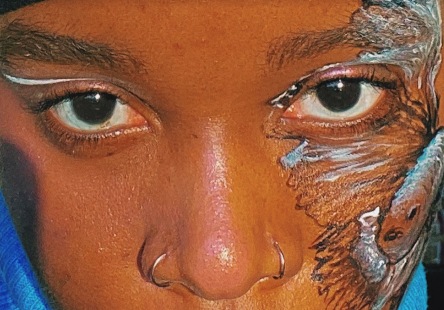 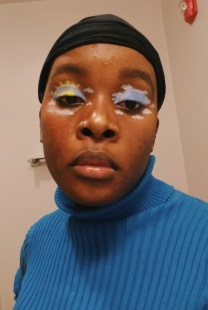 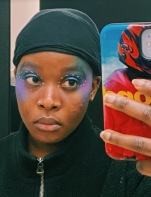 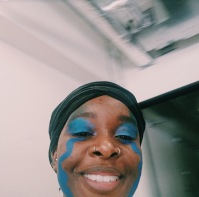 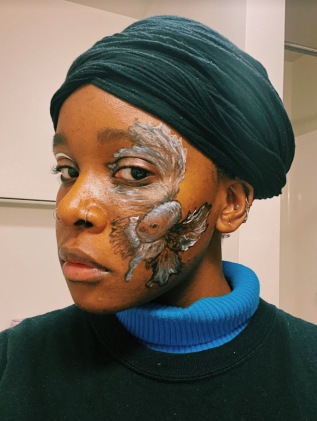 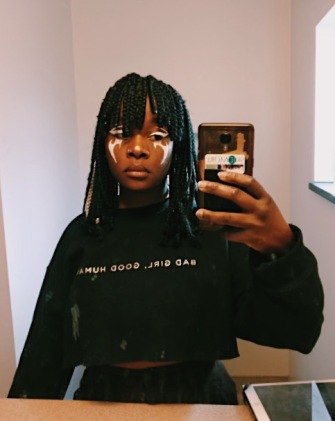 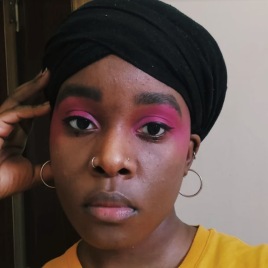 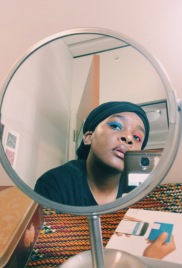 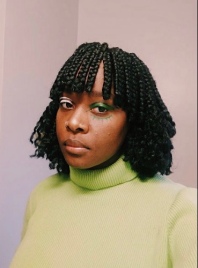 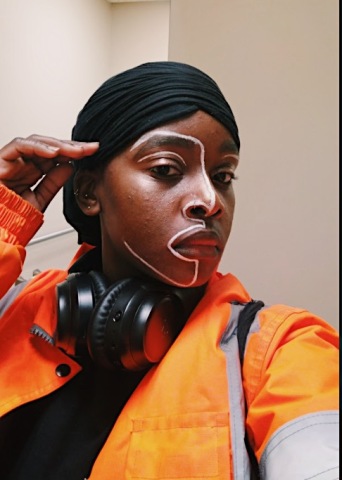 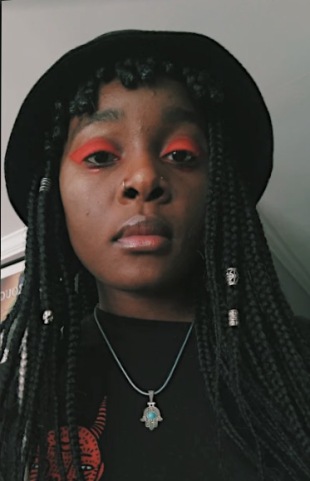 Simone Hadebe is a senior art major at Skidmore College. 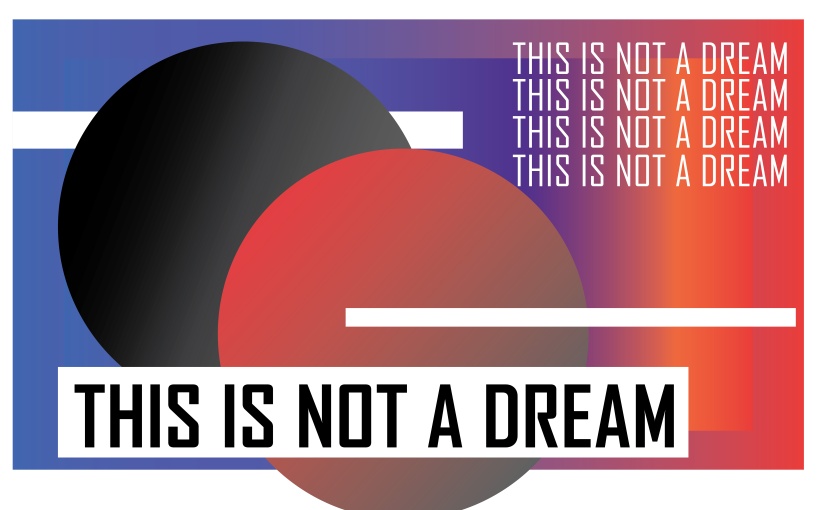 Harshini Karunaratne is a Sri Lankan-Peruvian photographer and visual designer. These works are a reflection of our current crisis as we face a new reality: “In the first image, I reflect on the romanticization of face masks. In the second, I combine shapes and colours in a dream-like way but to alert the viewer that what they’re witnessing, and experiencing, is not a dream.” 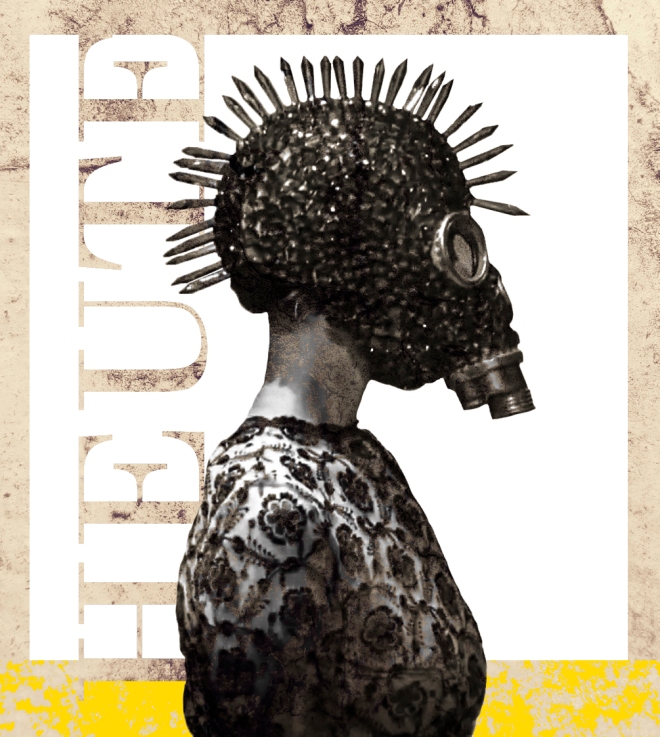 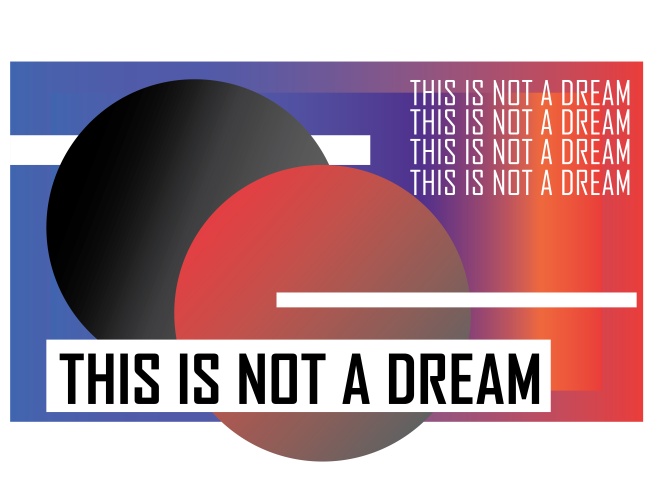 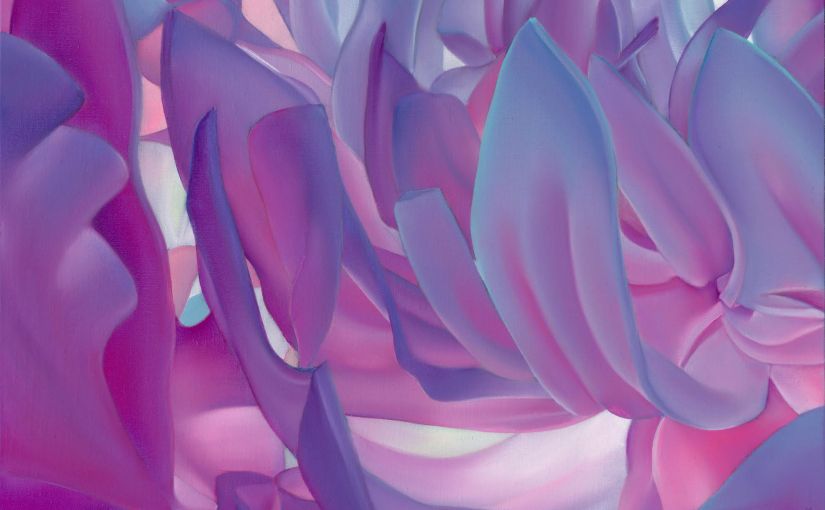 Born in 1982 in Salinas, California, Tammy Ikram (known as TIC) has maintained a studio in the broader Los Angeles area since 2013. She has also taught private drawing classes in both Orange County and London, England. Tic has exhibited in Hollywood, San Diego, Orange County, and Beverly Hills, and has upcoming exhibitions in the The Oculus at World Trade Center in New York and Tokyo, Japan. She will also have her paintings heavily featured on Season two of Selling Sunset on Netflix. She currently lives in greater Los Angeles with her husband, son and new daughter.

“My paintings explore space, movement, and the ideals of femininity. The fantasy of escaping from the mundane into a world filled with vibrant colors and verdant gardens of elegance captures my imagination.The sense of freedom I feel in that space directly feeds the emotional energy of my paintings. I use floral structures as my compositional framework in order to take the viewer into a state of wonder, beauty, and seduction.” 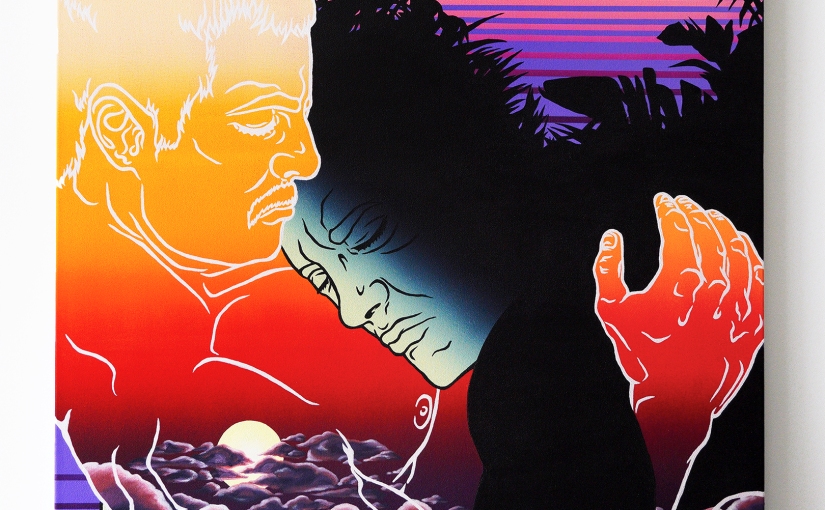 Paul Anagnostopoulos is a New York City based painter who graduated from NYU with a BFA in 2013.

“These paintings are heavily inspired by the Temple of Apollo at Delphi. Delphi was the holiest place in ancient Greece. It was where the Oracle made her predictions and also the site of the Pythian Games, a precursor to the modern olympics. Along the mountain path were the many treasuries and offerings to the gods. These works share this same notion of honor and devotion, performing multiple layers of competition: the strongest heroes, the richest cities, the most exuberant tributes- the best of the best march their way up this holy mountainside in a display of ritualized adoration. With nods to the same motifs of excess, kitsch, and camp often found in ancient displays of worship, this series serves as a contemporary temple devoted to the celebration of queer intimacy, history, and life.”

Touch My Cheek Before You Leave Me
2019, acrylic and oil on canvas, diptych 24 x 18 inches each 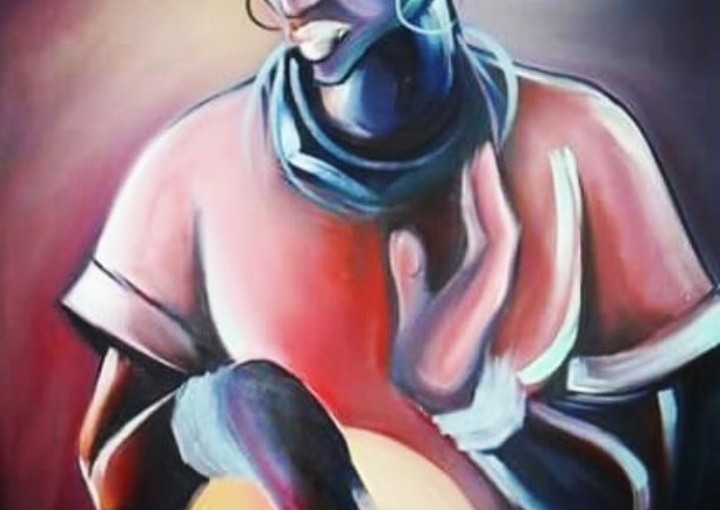 Chuka Okoye is a self taught artist from Anambra state, Nigeria. He seeks to capture visual elements of African culture, using art as a strong medium to showcase the beauties in the ways of life and other aspects that have gained little attention yet are deep and attractive. The dominant abstract style in the painted figures has been influenced by other artists of African descent. Okoye is greatly stirred by the works Sandorfi Istvan, George Inness and others.

The talking drum tries to capture in abstract style, the popular use of this musical equipment among the Yoruba indigenous peoples of Nigeria. The pitch and prosody of such a drum can be regulated to mimic the human voice, hence its name. 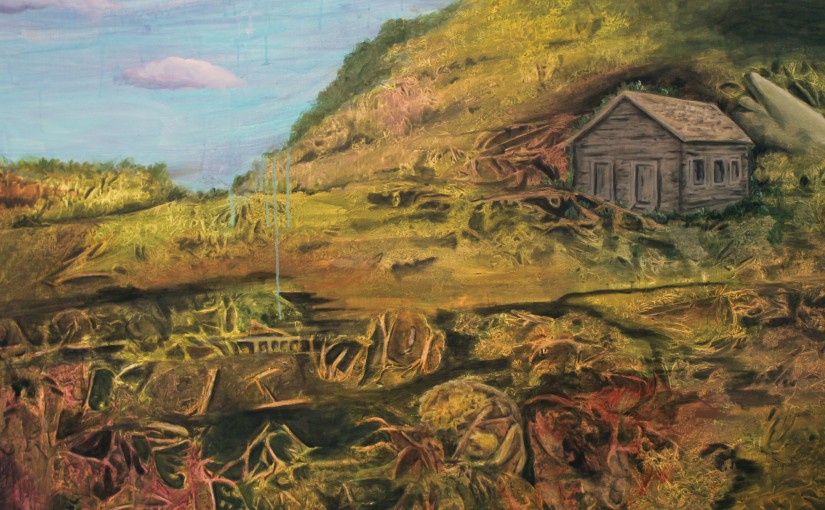 On December 21st, 2089, when the red star Betelgeuse—10th brightest in the sky—unexpectedly exploded in a blazing supernova, scientists told us we had nothing to fear. Our planet was too far away for this explosion to harm, much less destroy, life on earth, and to enjoy the show. The solstice had never been so spectacular.

“A once in a lifetime occurrence,” asserted one talking head on the yak circuit.

Another intoned, “We are thrilled to have a nearby supernova to study.”

And so the scientific community was abuzz. And this was understandable. Not every day a giant red star blows up in your neighbourhood. The problem was, the supernova had lit up the night sky—a dull yellow glow that obscured the stars but didn’t quite duplicate daylight. Indeed, the night sky was expected to be lit up for at least several months. And while scientists said no physical harm would come of it, no one could honestly predict the psychological ramifications.

“So much for the Christmas lights this year,” my partner Felicia lamented as we stood on our snow-covered lawn and stared at the sky.

“They still look nice,” I offered.

She had something there. The supernova had somehow dwarfed us all, and turned our little worlds upside down. Hard to explain, but perhaps the lack of a black sky dotted with stars toyed with our psychic equilibrium. For instance, people were staying up all night to watch the sky, much to the detriment of pace and productivity. Those were the two keystones of The New Society, as we called ourselves after the economic and societal convulsions of the past half century. Many problems had been solved, but many still remained. Perhaps the supernova would shine a light on our emotional and spiritual deficiencies.

My next door neighbour Peter waved to us from his window. His Rudolf the Red-Nosed Reindeer sweater made us smile. Not that we found it charming, but we knew that Peter expected us to find it charming. He had lost something when his wife Izzy left him for the Martian colonies. It was difficult to talk to him now, this once chipper man, he had whittled into cliches about weather and hockey. His reaction to the supernova had been singularly peculiar. He believed it was all a fraud, a great hoax perpetrated by subversive oligarchs in charge of the Martian operations. He believed that Betelgeuse was still intact and that the night sky was lit up by giant Martian spotlights.

We went inside. We kicked off our boots and fleeces. Glittering in the corner of the living room, the Christmas tree gave me pause. It never failed to strike me when I looked at it. Perhaps it was the reach back into childhood, the memories, the twinkling nostalgia. But on this Christmas Eve, it felt different. It felt weird.

“What is it?” Felicia asked, as she wrapped herself in a blanket on the sofa.

I smiled at her. Of course. Things didn’t just feel off, they were off. I mean, a supernova next door. Nothing to sneeze at. And Betelgeuse gone. That was messed up.

“Wonder how Santa Claus will manage tonight,” I said.

“Geez,” Felicia said, “you figure it would be easy-peasy with the sky all lit up like that. Unless he needs stars to navigate.”

“Hm, never thought of that.”

“Peter has totally lost it, eh?”

“Poor bastard. Loneliness will do that.”

I wandered into the kitchen. I felt like having a snack but was torn between savoury and sweet. I decided on hot chocolate and fitted the pod into the brewing unit. In seconds, a mug of frothy hot chocolate awaited me. I threw in a few miniature marshmallows. Felicia put on some Christmas music: Vince Guaraldi. Perfect. I blew on my mug and glanced out the kitchen window, nodding to the music, but with no feeling. It was almost ten pm. It didn’t look like daylight out there, but it also didn’t look like night. Christmas lights glowed faintly in the neighbourhood; nativity scenes and more kitschy displays were fired up. But the velvet loveliness of night was missing, the stars, the snow shining in the moonlight, the magic. I carefully sipped the hot chocolate.

Just then, I saw Peter in his silly sweater hopping around the side of his house, kicking up snow, almost like he was playfully chasing a child. He was wearing furry white boots and these thick tinted goggles that made him look loonier than he was. At one point he slapped his hands on his hips, looked up at the sky and started laughing. I felt a wave of pity for him.

Felicia came up behind me, put her arms under my armpits, and squeezed.

“Yeah. Must be tough during the holidays.”

“I think the supernova put him over.”

“Don’t ever leave me for the Martian colonies,” I said, more firmly than I intended.

“Now that you mention it.”

We both laughed. I sipped my hot chocolate.

“How about something stronger,” Felicia said. “It is the festive season.”

“What do you have in mind?”

She opened the cupboard where we kept the liquor and selected a bottle of Canada Club.

“Reminds me of Christmas with my dad and uncles. They used to hammer bottles of it over the holidays.”

I glanced out the window again. Peter was gone. Felicia took out two shot glasses and filled them with the amber whisky. 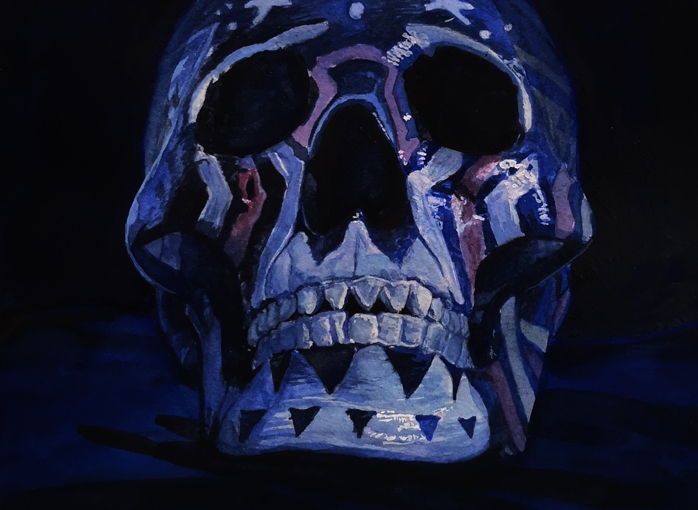 This work is an introspective examination, it explores themes of love, loss, mental health, isolation / connectedness, and healing, through the passage of time. Using both classical, and culturally specific tropes, such as skulls, along with Mummers, these works attempt to reveal anagnorisis, or a moment of startling discovery, leading to a form of personal resolution.

Jamie Bradbury has worked in drawing and painting for the past 15 years. Originally from Toronto, Canada, and based in Nemaska, Quebec, he Studied Painting at OCADU University, and obtained a Master’s degree from Central Saint Martins in London U.K, in 2010.

His works explore identity, situating auto-biographical narratives, within collective histories. Blending both personal and found source material together, he attempts to complicate where the personal begins, and the collective ends. Drawing from his experiences of living semi-nomadically, exploring both his Jamaican, and Newfoundland ancestral traditions, Jamies’ work often reveals an ongoing interest in cultural adaptation, malaise, and exchange.